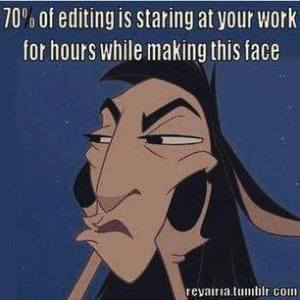 On to the basics of Self-Editing. All of this, everything that follows, is just a guideline. Never let technical correctness muffle your writers’ voice. Don’t assume every editors’ suggestion needs to be embraced. And remember that none of this is a substitute for a skilled  Concept Editor and a cohort of Beta Readers.

I’ve edited a few things over the years; actually, I’ve edited a lot of things even though my name isn’t on most of them. In that time, I’ve found there are some common mistakes that continue to crop up each time I forget myself and get dragged back into working on someone else’s Magnum Opus. I thought I’d put these together in a brief piece to help other budding authors avoid some of the common pitfalls. Keep in mind that none of this addresses issues of structure, plot consistency, themes, or voice.

Do NOT edit while you are still writing. Once you get to the end of your section take a break and don’t immediately go back over it. You, the writer, know what you’re trying to say, but the reader doesn’t. Or as a great writer once scrawled in a shaking hand, “Write drunk. Edit sober.” Until you put some distance (time & emotion) between yourself and the work, you will only see it through your filter as a writer. (See also why I need an editor)

Watch out for repetitive word use in the same sentence or paragraph. This can be particularly tricky when you are being technical in your writing. The more uncommon the word is, the more your repetition of its use will stand out to a reader. The more common a word, the more its repetition will bore your reader (such as repetitive for example). Try to keep a careful balance between clarity of meaning and precision of word use.

One of the basics of self-editing is ‘Show, don’t tell’. Keep in mind that every story needs a balance of showing and telling. Relying too heavily on either method can ruin a reader’s experience.
“Show, don’t tell” is the advice that every writer gets, the advice that promotes description in place of narration. It’s also the advice that can destroy a writer’s voice and ruin a cleverly constructed sequence. So show where you can, narrate where you must, and preserve the flow of your story.

Opening a sentence with “At this point…” “Meanwhile…” can add some interesting tone to your voice as a writer, but make sure it doesn’t turn your paragraph into a laundry list of actions instead of a scene. Which leads on to ‘danger words’. 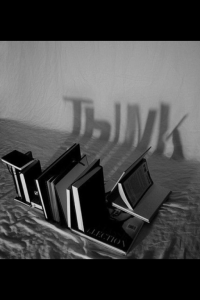 Also known as plague words, because you need to avoid them like the plague. There are lots of words in the English language that are good solid words, cornerstones of communication without which we couldn’t express ourselves. At the same time when they appear to regularly in your work they may be highlighting a problem;

Then points vaguely to the existing timeline and says, “It was after that last thing I talked about.” But the new action taking place in a subsequent sentence or sentence part implies that much already. You can almost always eliminate your thens without disrupting meaning or flow.

“Then” should be used as a clarifying agent, to communicate that two seemingly concurrent actions are happening in sequence. For example, “I drove to the supermarket. Then I realized I didn’t need to buy anything.” Without the “then,” it would be easy to mistake this as pre-existing knowledge or as a realization that happened during the drive itself.
– Robbie Blair

For a more definitive list (for those who have been poisoned by the language of academia) have a look at http://grammar.ccc.commnet.edu/grammar/plague.htm or even learn how to write good.

Generally, avoid meaningless words and fillers, unnecessary adverbs, and where it doesn’t ruin the flow of your story you can sometimes place adverbs within the verb.

If you are writing from the third person perspective and your characters start talking about themselves in the third person, it just sounds like they’re mentally imbalanced (unless that is your intent). When dialogue reads like the characters are talking about themselves in the third person such as “I have two paths… “I have chosen… “I need to… “I never… “I think… “I think… “I think… then those characters better have a god complex (or an inferiority complex) because normal people don’t feel the need to identify themselves before making every statement. If the people in the room can see you talking, you don’t need to let them know you’re there first. – I’m mentioning this point because it always surprises me how often this happens.

Your characters should all be different and not just little clones of you as an author. Each character should have a purpose and bring something to the work. If they don’t then they’re not characters, they’re plot devices or scenery. If you find you have a problem doing this you may wish to consider writing from a first-person perspective.
Look at the number of characters you have. If there are too many, see where some overlap and you might be able to merge them into a single individual. This can tidy up your work, giving your remaining characters greater depth. It also helps the reader who no longer needs to track a cast of thousands.

I’ve said this before and I’ll say it again, differentiate your names. If your reader can’t easily identify individual characters you may as well not have them. Not just how the names look on the page, but also how they sound when spoken aloud.
You may have put a great deal of thought into your characters. Perhaps you spent hours deliberating over the personality of your protagonist’s and which name best fits them. Maybe you even agonised over the subtle hints that each name provides, the baggage it comes with, and the impression you hope to impart, but to your reader, it’s usually just a name. Sure there can be a certain pleasure for both the reader and the writer in understanding the underlying message of a name, but your clever usage will rarely overcome a reader’s existing bias.

For example, any book I pick up where the character shares the name of an archangel, and if this book hints at the existence of an angelic ancestry… well let’s just say they don’t often inspire glowing reviews. On the other hand, a kick-ass warrior woman called Daisy can at least inspire a smile.

Spoken word regularly breaks grammatical rules. Slang, dialects, and contractions all do to the spoken word what Agincourt did to the life expectancy of French nobility. So don’t trust your automated grammar checker (you are using one aren’t you?) for any dialogue sections. Get someone (or some program) to read it aloud. There is no better way to spot jumbled or nonsensical sections.
Go through each character and make sure that their dialogue stays consistent. Make sure each character has their own voice, and that their voice isn’t just yours. You want consistency within each character and distinction between them. A grease monkey who never finished high school shouldn’t sound like an academic giving a lecture and vice versa.

Mix it up (structure-wise)

Vary your sentence length. Variety helps keep the reader engaged. Short, sharp, sentences are ideal for rapid action scenes. Long, run-on sentences strung together by commas and asides are great for those moments of calm and introspective thought. Use different sentence structures. If every sentence begins with the same words or has the same structure (such as the technically correct object => verb => adverb) the pace of the piece will be the same and it will feel very repetitive. Mixing up your sentence types keeps the writing fresh and varied, making it easier to read. Same for paragraphs, they can be of almost any length, from a single sentence to five or more. Paragraphs are meant to give readers breaks and giving them breaks at the exact same time over and over again gets extremely monotonous. A simple beat is boring, just as listening to a dripping tap can drive someone to madness, so mix up the tempo in your writing.

A thesaurus is no substitute for understanding the word you are using. Decimate may technically mean ‘to kill 1 in 10’ but that is rarely the common usage. I’ve got friends who have grown up with the connectivity of the internet. For them things like grammar and correct spelling are far less important, they argue that as long as the message is clear, who needs all those rules. There may be some point to that, one day we might be writing in emoji’s and L33T and the rules of grammar may have been forgotten. But there is a cost, with a reduction in vocabulary comes a reduction in the nuances that can be conveyed. We think in words, and anything that restricts our word choice also stifles our imaginative potential, it’s a rare person who can conceive of a notion that has not yet been named, and a rarer one still that can then share that notion with others.
What I am trying to say, in my rambling and imprecise way, is be precise in your use of language. If you have to tell rather than show, don’t use ‘angry’ when you can use words that are more appropriate and convey a lot more information. ‘Very Angry’ could be furious (suggesting a near loss of control), fuming (suggesting an internal rage), enraged (suggesting an imminent physical response), annoyed (suggesting a passing state), exasperated (suggesting the anger derives from some sort of recurrent obstacle), and so on. A consistent style of word usage can also go a great way towards setting the tone of your story and reinforcing the themes and imagery.

Metaphors aren’t bad but think carefully before you use them. Some people have trouble understanding metaphors. Some metaphors don’t translate well across different cultures. For those who speak English as a second language, metaphors are rather advanced usage and they may struggle with them long after their fluency has met or exceeded that of a native speaker.

A typo in tweet won’t raise too many eyebrows. An error on your blog isn’t the end of the world. A self-editing a manuscript, it is a different story. A typo in your work doesn’t just look unprofessional, it can break the flow of your story and jolt your reader out of the story.  Trust your Beta readers, use checking software, and do what you can to minimise those mistakes. Too many errors may alienate a large section of your potential audience. We all make typos, and even professionally proofed works will occasionally have an error slip through (industry-standard assumes one typo per 10,000 words).

Do NOT expect your work to be perfect. It never will be, which means you’ll never be finished. There comes a point when you have to accept that it is ‘good enough’ and you can release it into the world.

PS. Spell check is no substitute for a copy-editor.

PPS. I’m not going to tell you to minimise the passive voice. I have my reasons. Not the least of which, is that everyone else has probably told you already. I’ll also leave structure (order, flow and balance), themes and complimentary word choice, consistency of spelling, capitalisation, and hyphenation for another post. YAY! Won’t that be fun?

The Craft of Writing

The Craft of Writing